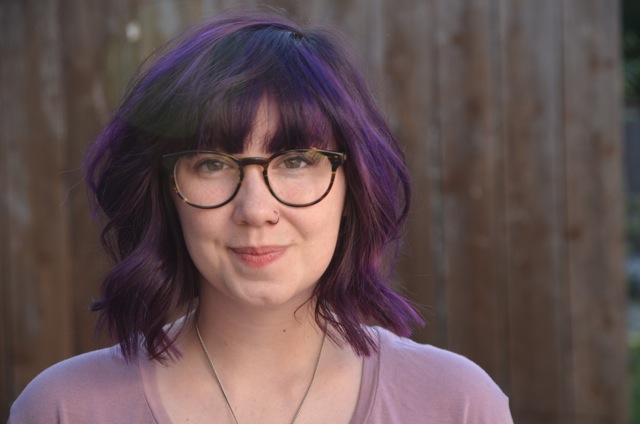 I stepped into a lower Greenville coffee house favorite this week, to meet one of Dallas’ emerging talents, Carson McCain, happy to chat about her most recent directorial work, Lungs by Duncan Macmillan opening this weekend at Stagewest Theatre.  A play driven by quick witted and deeply truthful conversation between a husband and wife in modern times.  As her and I discussed the play and its contextual hue within our contemporary theater landscape, the coffee house vibe engulfed us ~ a soft tune by Frou Frou, the sunbeams from the skylight above, thick tempered wooden chairs, vintage leather seats and folks around us in good company with their laptops and smartphones.  I was obliged to get an opportunity to have a one on one amidst frothy cappuccino’s.

Q: Tell me about how you came into the theater world, when did you first get the bug?

A: I grew up in Decatur, TX which is a small town about an hour from Dallas, population 5000, so not that many people.  I had a few incredible theater teachers in Middle School, Debra Hilton and High School, Lance Morse and they both instilled in me, how amazing the theater world could be.  Lance lived in New York and Debra had traveled the world so they had an understanding of commedia delle’arte, mask work and more non-traditional choices for the average adolescent theater experience.  When I began looking at colleges, I had a genuine commitment toward pursuing it as a career.  I applied to SMU and based on the competition, was shocked I received a scholarship to attend their theater program.  I began the program as an actor but quickly learned from one of my favorite professors, Jim Crawford, that I seemed to present myself more as a director.  I really got my directing feet wet while I was there.

Q: Which leads us to our next question, is there a particular genre of theater that you feel akin and attracted to?  Favorite Playwright’s?

A: I loved directing pieces by Enda Walsh and definitely Will Eno, I first directed two of his works at SMU.  But more specifically in terms of theater, I like those that start in realism and then heighten the language.  It could still be categorized as realism however the language is so poetic or sharp that it opens more possibilities in terms of rhythm and dialogical cadence.  Two of my favorite plays that I have had an opportunity to direct was Flu Season and Middletown.  I like also theater that gets to the heart of mental health.  I studied the Fitzmaurice technique that works the voice through the body, it tends to bring a holistic approach to the work.

Q: Did you quickly assimilate to directing while at SMU?

A: Yes, once I got a taste of directing, I knew it was where I needed to be.  I played Juliet in college and felt like I was struggling to listen to direction because I was hearing my own director voice in my head, I knew I wasn’t serving the whole play in that way.  2013 was when I really got serious, I felt it called forth more in me; after college I started directing smaller projects and quickly moved to more professional work.

Q: How did you come to direct Duncan Macmillan’s play Lungs at Stagewest?

A: I was first attracted to Stagewest as a theater company, I really admire Dana Schultes, the executive director and the work that she pulls in which is a really great balance of the classics and new works that challenge the viewer.  I saw the Nether, by Jennifer Haley last season and was so captivated and intrigued by the work.  I sent Dana my resume and just stated that I was excited about her season, and would love to direct a show.  She had seen my work at Second Thought theater, so she sent me the script Lungs and after I read it, I knew I had something special.

Q: What has been most surprising about the script?

A:  Duncan Macmillan requests at the beginning of the script that the play is to be performed on a bare stage; no scenery, no props, no furniture and no miming of objects.  So naturally I thought the hardest part about the play was to help the actor’s get the rate and rhythm.  However my two lead actor’s are exceptional in their craft.  Dani Nelson and Ruben Carrazana, intuitively understood this as soon as they came to the table.  Instead it has been about bodies and space, moving and having action that is connected to their internal motivations.

Q:  Why do you think the playwright makes the dialogue the focus of this play and not all the stuff that creates personal intimate space in terms of objects?

A: He wants to honor what it’s really like to be in a relationship which means sometimes things go fast and what you’re talking about is not what you’re saying (internal monologue and listening then not listening). One of my former teacher’s said that it’s important as a director, to put up buoys for your actors but then they also may need a life raft at times.  I adopted these same ideas and with this work there are moments every night that are different.  The actors have, at times, long periods of text and the dialogue may roll off the tongue and transmit as internal monologue and then we find points of connection again.  Touchstones within the dialogue and what is great about the play is we can choreograph those moments so that there is a physical shift when they are actually connecting versus when they’re not.  The playwright wrote this out of a personal place of being scared of the way the world was going.  He had just come off writing a big epic show for the national and wanted to write a scaled down piece with two people, on stage talking about the things he was thinking about in a contemporary time that he was deeply concerned with. The play deals with climate change and what we are like as a consumer culture, living in a time that considers so much to be dispensable.

Q:  I noticed you do have an artistic crew, so how did they interpret a ‘bare stage’ and nothing really to hint at a specific time and place?

A: We do have a backdrop created by our wonderful set designer, Clare Floyd DeVries, but it’s all recycled items, therefore it serves as almost an art installation piece.  My husband, is the sound designer, Preston Gray and he is playing with both the use of silence mixed with ambient white noise.  The costumes have been done by the talented Evan Michael Woods which we went with a minimal color palette of a very utilitarian usage.  The lighting is being done by Jared Land and he has been playing with floods of light since color lighting and a strong design is discouraged.  What I have experienced is, scarcity, many times inspires an incredible opportunity to highlight the action.  We are not beholden to rely on spectacle in this case, it is really theatre of absence.

Q:  Have you worked with your actor’s to find a syncopation or reliance on an emotional improvisation that could be played with during the rehearsal process?

A: One of the things that Dani has said, and has resonated with me is “specificity of the movement allows for us to play more”.  There is a monologue where she is experiencing a great deal of grief and it reveals itself as anger and what we have her doing is making a maze on the stage.  We choreographed that and have her increase the rate of movement as the emotions intensify.  The strong choices in movement allow her and both of them to find emotional discovery to the point sometimes of hysteria, laughter, absurdity and calm.  Recovery at that point for Dani’s character comes in the words “I’m sorry I don’t know what I did wrong”.  My job is to help her with the physicalization, ask questions but not limit her or Ruban’s experience.  My ‘vision’ is not so precious that it interrupts a natural and organic process.  I block within their own  impulses.  In normal circumstances they would be drinking gin at a kitchen table or folding clothes, so what can we do that is non-literal with movement to help with intentions?  For Ruben, at one time, that means walking an imaginary tight rope or Dani doing a sun salutation.

Q: Do you think we are in a new movement of theater?  Somewhere entangled and influenced by streaming content, binge watching episodic television, film and social media?

A:  I do!  I believe we are in a new world of theater, post-postmodern, where as postmodern was so much about looking at yourself and watching the irony of it in terms of content and structure.  We seem to have come back around to the necessity of sincerity.  Ultimately if we can just keep dialoguing with each other, speaking heartfelt truths ~ there is healing in that.